Phase I of a comprehensive benchmarking report on the LADWP was just released.

The report itself confirmed a few things most ratepayers already know – that the LADWP’s payroll costs are dramatically higher than that of their peers and their customer service is quite poor.

Several immediate action items were recommended, the first being recommendations to improve customer service. The others were focused on two additional areas the LADWP placed last in – high amounts of electricity lost in transit and lost revenue due to an inability to collect unpaid debts.

The report found positives too. While rates are very high on a national scale, they are in line with their regional counterparts. Obviously, the proposed rate increases in the coming years will impact this ranking. Reliability scored well and total costs were in the 2nd quartile compared to their peers, thanks to savings in areas such as in customer service and generation.

Unfortunately, the Mayor’s Office press release announcing the findings of this report appeared more concerned with highlighting the good, while omitting the bad. In fact, the release states that the LADWP ranked in the 1st quartile in operating costs, when in fact they were ranked in the 2nd. Not a word was devoted to their bottom scores in the items mentioned above or the enormous savings that could come from payroll reductions to a level that would match that of their peers.

As seen in the image below (bottom text is my own) if the LADWP were merely to reduce payroll expenditures to be in line with other utilities, let alone the massive savings from reducing pay to the market avg, they would save over $320M a year. 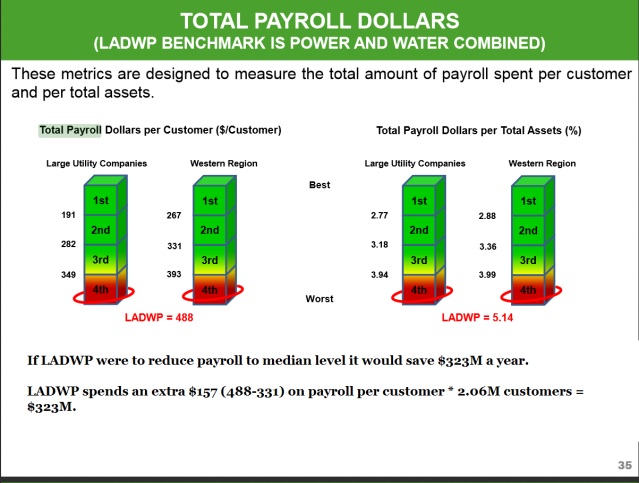 This is troublesome because it would suggest that the Mayor’s Office is more concerned with painting the LADWP in a positive light, as opposed to acting in the best interest of the ratepayers. Particularly given future rate increases are planned as early as this spring, ratepayers are in desperate need of an advocate that acknowledges these rate increases are mostly to support excessive LADWP pay.

The LADWP ranked in the bottom quartile in terms of payroll spent on administrative staff, while ranking favorably (meaning spending less) for customer service.

Naturally, pay reductions should occur for all LADWP employees to a level that is less obscene when compared to their LA area counterpart. For example, the average customer service rep’s pay could be reduced to “only” 40% above the market average of $60k a year, as opposed to the current $72k avg.

While it is likely an increase in hiring for customer service reps will occur, a reduction in pay or total administrative staff will be much more difficult. Unfortunately, this is exactly what is needed to reduce the growing burden on ratepayers – who need to make sure their interests are being put first by City Hall.