Oakland police officer Malcolm Miller more than quadrupled his $107,627 salary to $489,662 with overtime, benefits and other specialty pays last year — making him Oakland’s highest paid employee for the third year in a row, according to just-released pay data.

Using historical data from TransparentCalifornia.com, Fellner discovered that Miller, along with colleagues Eric Karsseboom and Huy Nguyen, have received OT payments suggesting average work-weeks of 80, 76 and 88 hours, respectively, over the past five years, as shown in the chart below:

Average hours worked per week for 3 Oakland police officers based on OT, 2011-2015 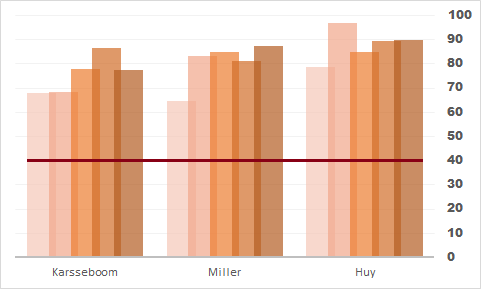 Fellner warned that, “The public should be concerned that working such an extraordinary amount of hours for years on end is a recipe for disaster, particularly given the life-or-death situations police officers routinely encounter.”

The next three highest-compensated Bay Area city workers were:

The average full-time, year-round Milpitas employee received $187,597 in total compensation last year — second only to the City of Industry out of the 391 cities surveyed statewide.

After Milpitas, the next five cities with the highest average compensation packages for full-time, year-round employees were all from the Bay Area:

Total employee compensation for all 95 Bay Area cities surveyed increased 9.5% as compared to the previous year. The three Bay Area cities with a population of at least 10,000 that experienced the largest increases were San Ramon (25%), Newark (19%), and Vallejo (14%).

Fellner points to recent reports of residents fleeing the Bay Area as an example of the burden excessive public pay can have on taxpayers.

“Elected officials impose a tremendous burden on taxpayers when they cave to the demands of public unions for ever-higher levels of government pay. Now, many residents — who on average make much less than their government counterparts — are being forced from their homes due to the sky-high levels of taxes required to fund such exorbitant pay packages.”

Compensation is defined as total wages plus the employer cost of retirement and health benefits. Full-time, year-round employees are defined as those receiving a salary equal or greater to 90 percent of the “annual salary minimum” reported.

To view the entire dataset in a searchable and downloadable format, visit TransparentCalifornia.com.