The total pension benefits promised by the California Public Employees’ Retirement System (CalPERS) increased 886 percent from 1987-2016 — a rate 21 times greater than the cumulative increase in the state’s population, according to a just-released analysis from Transparent California.

The growth in promised CalPERS benefits dwarfs the rate found in a variety of other economic metrics, as shown below: 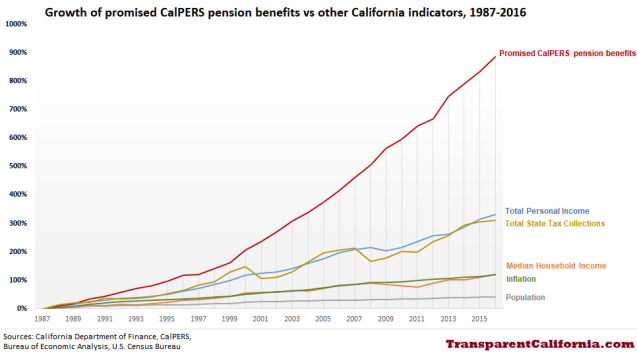 Transparent California credits Ted Dabrowski and John Klingner of Wirepoints as the source of inspiration for this chart and analysis. In Illinois state pensions: Overpromised, not underfunded — Wirepoints Special Report, Dabrowski and Klingner irrefutably demonstrate that the true source of Illinois’ pension crisis is the explosive growth in promised benefits, not a lack of funding.

“Some politicians and government unions have claimed that last decade’s market downturn is the cause of California’s pension crisis. As this data makes clear, the real cause is the tremendous growth in the size of the benefits that were promised.”

The below chart reflects the cumulative growth in promised CalPERS pension benefits (accrued liabilities) alongside a variety of California economic metrics:

Fellner observed that blaming the inevitable market downturn as the source of CalPERS funding woes is analogous to a gambler citing a bad run at the blackjack table for having less-than-anticipated funds:

“Elected officials’ willingness to take on such massive debt, not the fact that the stock market sometimes goes down, is the root cause of California’s pension crisis.”

Transparent California is California’s largest and most comprehensive database of public sector compensation and is a project of the Nevada Policy Research Institute, a nonpartisan, free-market think tank. The website is used by millions of Californians each year, including elected officials and lawmakers, government employees and their unions, government agencies themselves, university researchers, the media, and concerned citizens alike. Learn more at TransparentCalifornia.com.