Spending 52 percent more than the market average for public employees’ medical insurance is costing California taxpayers at least $3.3 billion annually, according to a Transparent California analysis of 672,000 payroll records from more than 1,500 individual government agencies statewide.

The analysis found that California’s state and local governments spent an average of $14,288 per employee on medical insurance last year. That amount was 52 percent greater than the regional average of $9,381, as reported by the 2018 UBA Health Plan Survey, the nation’s largest and most comprehensive of its kind.

There was a tremendously wide variation across the agencies surveyed, with one agency paying as much as $80,000 for a single employee’s medical insurance plan, while several others paid rates more in line with the market average.

The most expensive plans were found at California’s special districts, which likely reflects the fact that personnel costs for these agencies are a comparatively smaller percentage of total expenses, which makes excessive spending less noticeable to ratepayers and the public.

At more than triple the market average, the $29,923 average cost at the Central Contra Costa Sanitary District (Central San) was the largest of any major government agency statewide. 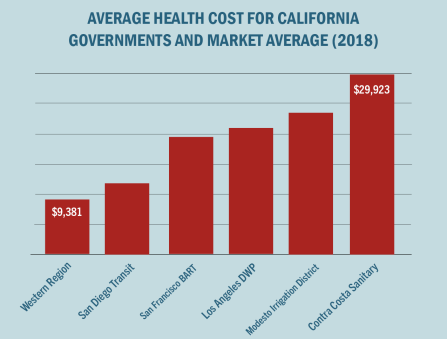 Other key findings from the analysis are presented below:

“Spending over $50,000 on a single employee’s health insurance plan is an inexcusable waste of taxpayer funds,” according to Transparent California Executive Director Robert Fellner.

“Medical plans this expensive simply don’t exist in the broader market, which is a strong indication that providers are exploiting the fact that these governments are happy to pay inflated prices with other people’s money,” Fellner continued.

A recent survey from the Kaiser Family Foundation, for example, found that 92 percent of family medical plans had premiums of less than $26,000: 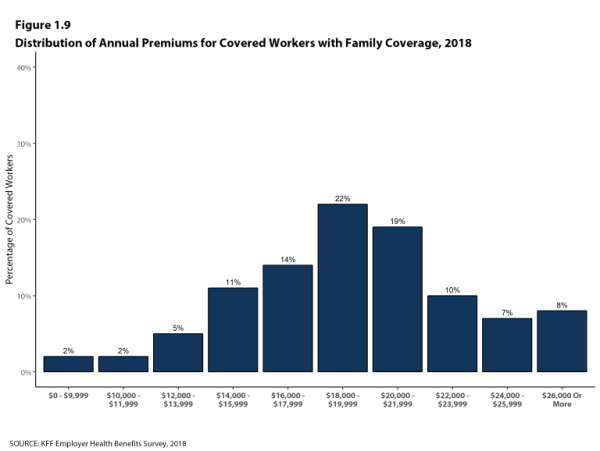 “The annual premiums of over $50,000 found at agencies like Central San and the LADWP are such extreme outliers that price gouging, rather than a genuine increase in value provided, is the only explanation that makes sense,” Fellner said.

“That was, in fact, the explanation that emerged after we looked into similarly high costs at a Los Angeles-area government back in 2016,” Fellner continued.

“At that time, Aetna was charging the City of Industry over $50,000 per employee for medical insurance, but after an audit was done, the city reported that they could increase their employees’ medical insurance coverage by purchasing a plan from a different provider that cost nearly 65 percent less,” Fellner explained.

In the private sector, employees typically pay around 30 percent of the annual premium for their medical insurance.

But many California governments, especially those with the most expensive plans, offer these plans at no cost to the employee. Such an arrangement makes it easier for providers to artificially inflate rates, according to Fellner.

“Employees at both the LADWP and Central San do not bear any of the cost of these wildly expensive medical plans,” Fellner continued. “This makes it easier for providers to artificially inflate costs, as consumers are obviously much less cost conscious when someone else is paying the bill.”

Costs reasonable at many agencies

While California governments, on average, spent well above the market rate, there were several agencies that offered plans at or around market rates.

“Cities like Ventura, Pomona, Newark, Hanford and several others are all behaving in a fiscally responsible manner when it comes to health costs,” Fellner said.

“The city of San Diego and many area transit districts are likewise paying reasonable costs,” Fellner continued, “demonstrating that there is no legitimate need for other agencies to pay such inflated rates.”

To see where any California city or special district ranked on the statewide list, or for more information about the analysis, please contract Transparent California Executive Director Robert Fellner at 559-462-0122 or Robert@TransparentCalifornia.com.

Transparent California is California’s largest and most comprehensive database of public sector compensation and is a project of the Nevada Policy Research Institute, a nonpartisan, free-market think tank. The website is used by millions of Californians each year, including elected officials and lawmakers, government employees and their unions, government agencies, university researchers, the media, and concerned citizens alike. Learn more at TransparentCalifornia.com.