That’s according to an analysis of newly released 2020 pension payout data posted on Transparent California — the state’s largest public pay and pension database. 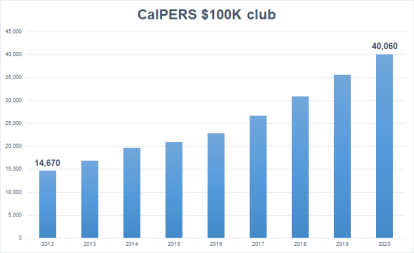 The growing number of $100K-plus pensions reflects an increase in newer retirees who benefited from the pension enhancements passed in 1999 and 2001. As documented by reporter Ed Mendel of Calpensions.com, CalPERS advocated for these enhancements by falsely claiming that they would not cost “a dime of additional taxpayer money.”

In reality, these enhancements are part of the reason why governments across the state are now struggling under the weight of soaring pension costs.

When accounting for all public pension systems in California, not just CalPERS, California taxpayers and public employees spent nearly $51 billion on pension costs for public employees in 2019, according to the most recent data available from the Census Bureau. That’s up 92 percent from the $26.6 billion spent in 2011.

Last year’s report found that there were over 80,000 retired California public employees collecting pensions of $100,000 or more, which includes retirees from CalPERS, CalSTRS and the dozens of other public pension systems in California. That number is likely to increase to roughly 90,000 once the new, 2020 data is reported.

Transparent California is California’s largest and most comprehensive database of public sector compensation and is a project of the Nevada Policy Research Institute, a nonpartisan, free-market think tank. The website is used by millions of Californians each year, including elected officials and lawmakers, government employees and their unions, government agencies themselves, university researchers, the media, and concerned citizens alike. Learn more at TransparentCalifornia.com.