Overtime pay at the Los Angeles Department of Water and Power (LADWP) hit a record-high $250 million last year, an increase of 84 percent from 2013, according to new pay data from TransparentCalifornia.com. 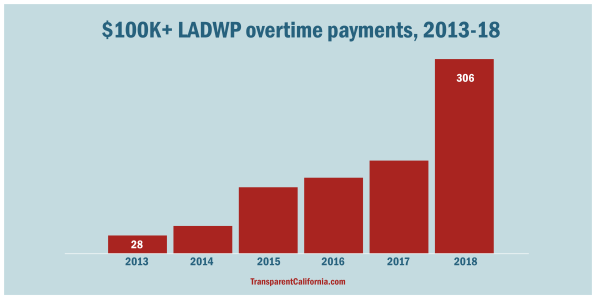 The department’s top OT earner was principal security officer Ricardo Frias, who received $313,865 in overtime pay on top of $25,133 in regular earnings. The LADWP has not responded to an email and phone call seeking clarification regarding the abnormally large payout.

Six-figure OT payments all contributed to the department’s top three earners, who were:

The average LADWP worker made $134,600 last year, and $199,764 when the cost of employer-paid retirement and health benefits are included.

An independent study previously found that payroll expenses at the LADWP were vastly higher than peer utility agencies, both regionally and nationwide.

Specifically, the study found the LADWP’s total payroll expense was equal to $488 per customer served, whereas the median rate among large utility companies nationwide was only $282.

Based on the number of customers served, this suggests the LADWP is spending an additional $424 million annually as compared to the median peer utility company nationwide.

The department is currently in the midst of a 5-year rate hike plan, with water rates increasing by an average 5.26 percent annually from 2016 through 2020, according to an LADWP fact sheet.

This is the fifth year in a row that Thompson received overtime pay worth more than triple his regular salary, a feat which has enabled him to collect nearly $2.1 million in cash earnings over that time period.

As reported previously, Thompson has been earning outsized OT since as far back as 1993, and has been frequently cited as the city’s top OT earner in various reports since then.

A previous Transparent California analysis found that overtime pay consumes a significantly higher percentage of total expenditures at the LAFD than it does at other major fire departments nationwide.

Most overtime is spent on things other than fires or other emergencies, according to reports from both the Los Angeles Times and the Los Angeles Daily News. Another factor contributing to such excess is an inherently wasteful contract provision that requires vacations to be treated as hours worked for the purpose of calculating overtime pay.

The average full-time, year-round Los Angeles city worker made $159,839 in pay and benefits, according to the data.

This is the first time that Los Angeles has reported the full cost of employer-paid benefits on an employee level, according to Transparent California Executive Director Robert Fellner.

“We appreciate the hard work of Mr. Kevin McNeely and his staff in producing the 2018 report, which fully captures the total cost of employee compensation for Los Angeles city staff,” Fellner said.

Transparent California is California’s largest and most comprehensive database of public sector compensation and is a project of the Nevada Policy Research Institute, a nonpartisan, free-market think tank. The website is used by millions of Californians each year, including elected officials and lawmakers, government employees and their unions, government agencies, university researchers, the media, and concerned citizens alike. Learn more at TransparentCalifornia.com.